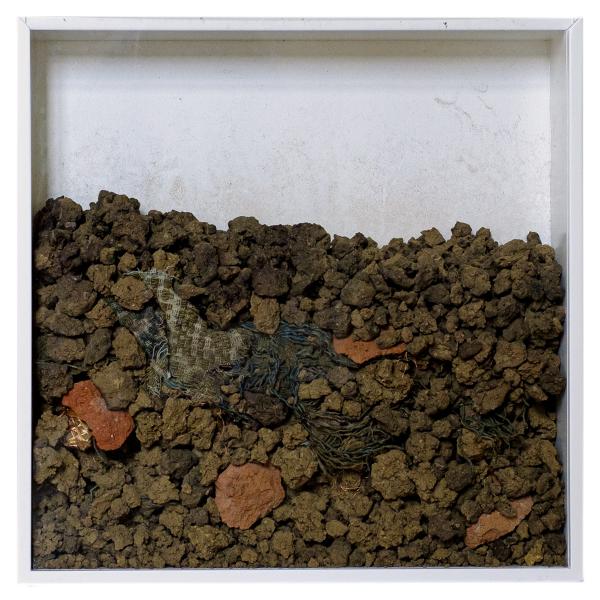 „Michael,
At the bottom of the hole you saw a couple of buttons,
Some rags and bones rotten.
And the rest of it all – just soil.
Is that all? Not fair, just soil.
When you plucked the grass crying, and when you hit the land,
You matured with a century.
And it came upon you – that the unfair is maybe you.
This very same land that you hit is one of the heroes that you missed.
May the buttons live, they are not immortal
Dead heroes turn into soil.
This soil, Michael…
This soil is sacred!“

Once upon a time there was a village. Once upon a time there was joy. Once upon a time…
Today is just this – soil which has completely erased the traces of life and the proof for culture. Not until one dig very deep into it, mostly into the written sources and the preserved memories of the very few living witnesses, because physically there is only abundance that is left in the box.
Herbarium in memoriam of a village – migrated and deleted along with many others in the name of an “ideal goal”*.

* Till 1944 just two dams had been built. Then on the stage a lead part takes “power of the people” - in 1944 till 1966 under supervision of The Soviet union 35 dams were built or in a process, with total volume amount of 5.147 million m2. This is the purpose hundreds of people to be forced to move to nearby towns and villages, and their used be homes to be flooded. This is how many places disappeared from the map of Bulgaria. Most of the villages were ancient- with roots a few centuries back. Water didn’t flooded just buildings, but many cultural relics, folklore, memories, faith. In 1953 two villages had been evicted- Krapets and Popovo. According to the plan just one of them remained in the dam area. The other had been destroyed and erased from the map- its church blasted number of times, then buried under the mud. The place is planned to be new residence of comrade Todor Jivkov- nice view to the new dam and virgin forests of Vitosha mountain- no other buildings around to disturb the scenery. The whole area is surrounded by barriers and guards, and access to regular people- absolutely denied.

The Herbarium project explores the work environment in contemporary culture in which ideas are created and exchanged. The focus of Herbarium is to compile a collection of sealed creative energy in boxes/40х40х10 or 20х40х10/ of different generations of artists around the world. The contents of each box are accompanied by a description and a sound file with the artist's voice. The artists, invited by the curator of "Herbarium", choose two new participants - so the project traces the exchange of creative energy in the artworld. The development of the collection has no time limits, it grows exponentially with each new participant until the final exhibition is announced. The H Talks series /video portraits of the artists/ are shot during the preparation of each presentation of the Herbarium collection in the artists work environment and studios. All the information, gathered in the process of developing the collection, will be available to all researchers, curators, gallery owners, students or art lovers who are interested in the less visible mechanisms through which contemporary culture functions.